1. What is urban black and odorous water body?


2. What is formation mechanism of black and odorous water body?


3.Ideas and technologies for the treatment of black and odorous water bodies


3.1.1 Sewage interception by pipes
The sewage interception by pipes is the most direct and effective engineering measure for the treatment of black and smelly water bodies, and it is also a premise for other technical measures. By laying sewage interception pipelines along rivers and lakes, and reasonably setting up lifting (transportation) pump rooms, the sewage is intercepted and incorporated into the urban sewage collection and treatment system.
Scope of application: Sewage discharge outlets along the coast of urban water bodies, initial rainwater or dry flow discharge outlets of diversion rainwater pipes, and coastal discharge outlets of combined sewage systems.
Restrictive factors: large engineering volume and one-time investment, difficult project implementation, and long period.


3.2.1 Garbage disposal
The garbage disposal along the urban water body is an important measure for pollution control, and the cleaning of the temporary garbage stacking point is a one-time engineering measure, which should be cleaned up in place at one time.
Scope of application: It is mainly used for cleaning up the temporary dumping point of garbage along the urban water body.
Limiting factors: in areas with a long history of garbage storage along urban water bodies, incomplete garbage removal and transportation may accelerate water pollution.

3.2.2 Removal of biological and floating debris
Aquatic plants, riparian plants and fallen leaves are seasonal source pollutants in the water and need to be cleaned up before drying up; floating objects on the water surface mainly include various fallen leaves, plastic bags, and other domestic garbage, which require long-term cleaning and maintenance.
Scope of application: It is mainly used for the seasonal harvesting of aquatic plants and riparian plants in urban water bodies, and the cleaning of seasonal falling leaves and floating objects on the water surface.
Limiting factors: The cost of cleaning up seasonal biological debris and floating debris is high, and it is difficult to supervise and maintain. 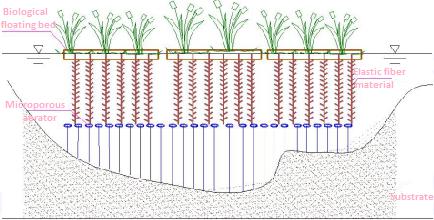 Scope of application: It can be widely used in the long-term maintenance of the water quality of urban water bodies. Through the restoration and system construction of the ecosystem, it can continuously remove water pollutants and improve the ecological environment and landscape.
Limiting factors: Control of external and internal pollutants is the premise, ecological purification measures must not conflict with other functions of the water body; ecological purification measures have insignificant improvement effects on severely polluted rivers; plant harvesting, treatment and disposal costs are high.

3.3.2 Rehabilitation Technique
Taking the form of planting ditch, ecological revetment and permeable brick, the original hardened river bank (lakeshore) is reconstructed. By restoring the natural purification function of the shoreline and water body, the pollution control effect of the water body is strengthened.
Scope of application: Mainly used for ecological restoration of hardened river banks (lake banks), which is a long-term measure for urban water pollution control.
Restrictive factors: the amount of engineering is large, and the disposal cost of ecological shoreline plants is high.

3.3.3 Artificial oxygenation
Mainly use water drop, fountain, jet, and other various forms of aeration to effectively increase the dissolved oxygen level of the water body.
Scope of application: it is mainly applicable to the water quality maintenance of urban water body after treatment, with water body reoxygenation function.
Limiting factors: severe black and odorous water body is not applicable, it needs continuous operation and maintenance, and consumes electric energy.

After placing the matrix of the biological lake purifier combination in the contaminated area of the river, a reoxygen generator is installed on the river bank.
During operation, the compressed air generated by the reoxygen generator enters the special reoxygenation device through the transportation pipeline, releasing a large amount of fine air bubbles quickly provide dissolved oxygen in the black and odorous water body in the contaminated section of the river. The aerobic bacteria growing on the biological filler use dissolved oxygen to oxidize and metabolize the organic pollutants in the river water, and decompose the organic pollutants into water and carbon dioxide and other harmless substances. The ammonia nitrogen in the water is first oxidized to carbon dioxide by nitrifying bacteria, and then oxidized to nitrate, which is reduced to ammonia in the hypoxic area and overflows the river water.Carbon dioxide and water from the oxidation of ammonia and other organic matter return to nature, thereby completing the purification of polluted rivers. Moreover, this technology has the ability to continuously accept polluted water and purify up to the standard, which fundamentally solves the problem of black odor rebound.